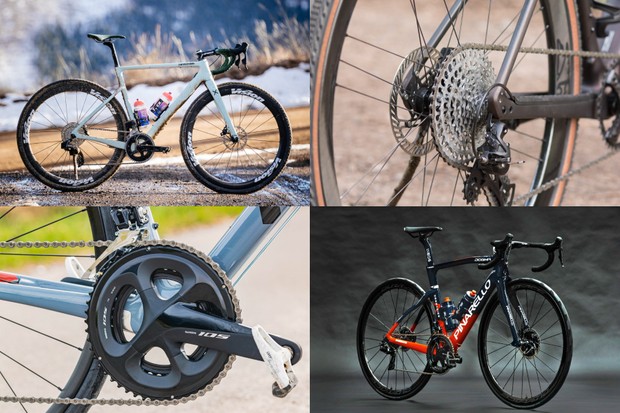 While at BikeRadar we occasionally get hints, tips and inside knowledge of what’s to come, we certainly don’t know every secret the bike industry has in store for us.

But this hasn’t stopped us from hypothesising as to what we might see in 2022.

These are the biggest road cycling and gravel riding tech trends that we think will dominate the year ahead.

From disc brakes dominating the Grand Tours to Shimano 105 Di2, via aero gravel bikes and the increasing standardisation of tubeless tyres.

Read on as we gaze deep into the crystal ball to predict what’s on the horizon in 2022. And for more tech predictions, listen to the latest episode of the BikeRadar podcast, where Tom Marvin, Sam Challis, Alex Evans and more of the team discuss their predictions for both road riding and mountain biking.

Every Grand Tour will be won on disc brakes

My tech prediction for 2022 is that every Grand Tour will be won on road disc brakes and no notable rim-brake bikes will be released next year.

The team-issue Pinarello Dogma F was one of the only road bikes released last year to still feature a rim-brake option, but Team Ineos made the announcement in September that it would switch to discs for most events in 2022.

As a result, this will be the first year that every WorldTour team rides on disc brakes in some capacity.

Unless there’s a last-minute change of heart from one of the big teams, this means it’s almost a certainty that every single Grand Tour will be won on disc brakes.

Tadej Pogačar switched briefly to a Colnago V3RS with rim brakes for some mountain stages of the 2021 Tour de France. Will 2022 see disc brakes take over completely in the Grand Tours?
Tim de Waele / Getty Images

In all honesty, this is hardly a seismic moment in the world of cycling tech – notable, yes, but disc brakes have already proven themselves time and again. Comparing the merits and downsides of each at this stage is tiresome at best.

However, for rim brake aficionados such as myself, this definitely suggests that rim brake road bikes are going the way of the Dodo.

I expect the availability of rim brake parts and wheelsets will continue for many years to come – after all, SRAM Red eTap AXS and Shimano’s new Dura-Ace groupsets are both available with rim brake options.

But if you want a top-end bike equipped with rim brakes off the shelf, act soon.

Campagnolo has already jumped to 13-speed with its Ekar gravel groupset. Will we see the same on the road this year? Sam reckons so.
Matthew Loveridge / Immediate Media

2021 saw all three of the big road groupset brands add more sprockets to their cassettes.

SRAM bumped Rival up to 12-speed and gave it the electronic AXS treatment and Shimano made its long-awaited move to 12-speed for Dura-Ace and Ultegra. Meanwhile, Campagnolo leapfrogged them both by introducing its 13-speed Ekar gravel groupset.

Yet my predicted tech trend for 2022 is more of the same.

And why shouldn’t that be the case? There’s been the argument that we don’t need any more gears on road bikes for decades – Henri Desgrange said anything more than a fixed-gear was cheating, the sadist – but if extra sprockets can be accommodated with no major disruptions to bike standards or drivetrain performance, bring them on, I say.

You either get more gearing range with the same jumps in between, or smoother progression for the same range. So long as the sprockets are kept to a sensible size, there’s no downside, or no reason for it not to happen.

With the release of Ekar, Campagnolo introduced its N3W freehub standard. It has the same spline pattern as Campag’s pre-existing freehub, but is 4.4mm stubbier, so a 10t sprocket and tiny 9t sprocket can project off the end of it within a standard freehub spacing.

This opens up all sorts of gearing possibilities, and Campagnolo says it will base its future designs around the N3W standard.

What’s more, the Italian brand has been the first to incorporate an extra sprocket on its groupsets since the move to 9-speed, and its current 12-speed groupsets have been matched by both main competitors now. With Ekar setting the standard, all evidence suggests road 13-speed will happen in 2022 for Campagnolo.

And while Shimano might traditionally take a while to act to the latest trends, I don’t think the Japanese brand is done adding speeds to its groupsets just yet either. But I’ll leave it to my colleague, Simon von Bromley, to delve a bit deeper into that.

SRAM looks like it might buck my trend for 2022, having only just pushed its third-tier road groupset to 12-speed. But given that it’s widely considered the most forward-thinking of the three groupset makers, I wouldn’t rule out a surprise at some point either. I look forward to seeing how the year unfolds.

As Sam has already mentioned, 2021 saw Shimano finally announce and release the new 12-speed Dura-Ace and Ultegra Di2 groupsets (even if availability of the latter is very thin on the ground), and that’s been lovely for those with lots of money to spend.

But with that out of the way, I’m now most excited about the prospect of a new Shimano 105 groupset in 2022.

A new 105 groupset has typically been announced around a year or so after the release of a new Ultegra groupset, so I’m hopeful 2022 will be the year Shimano’s great-value, workhorse road groupset sees a similar refresh.

What might we expect? Well, at the very least I’d hope it makes the jump to 12-speed, but what I’d really love to see is a move to electronic shifting.

SRAM has made huge strides in recent years by bringing its eTap wireless drivetrain tech to lower price points, most notably with the release of Rival eTap AXS, the company’s third-tier groupset and thus its rough equivalent to 105.

If Shimano wants to remain competitive in the cheaper end of the road bike market, the company needs to pull something big out of its hat.

Of course, as with SRAM Rival eTap AXS, I’m sure a Shimano 105 Di2 groupset would come with a weight penalty over its pricier siblings, but – you know me – I don’t really care about that.

And one more very specific point. I’d also like to see Shimano add in contact point adjustment to its 105 hydraulic shifters.

As it stands, you don’t have the ability to adjust the amount of brake lever travel with 105 shifters, as you can with Ultegra or Dura-Ace. It’s a very small thing, but come on, Shimano, why did you take that away from us anyway?

If this was to happen, it could be the thing that finally convinces me to go electric on my personal bikes.

At the moment, the cost-to-performance ratio of electronic gearing just doesn’t justify itself, in my opinion. Yes, it makes bikes look cleaner and “beep-whizz” shifting is very cool, but it doesn’t make you any faster.

Bring that cost down to something more reasonable, though, and I just might be convinced to cough up my own money.

The ball‘s in your court, Shimano. Don’t let me down.

The evolution of gravel bikes

The new Specialized Crux is among the latest crop of gravel race bikes.
Immediate Media

Now, don’t get me wrong. I’ve got nothing but respect for riders who want to load up their lives on their bike and head off into the wilds on bikepacking adventures, and so need a bike with a multitude of fixtures and fittings.

But, frankly, that’s not for me. There are too many great hotels, pubs and warm places to rest after a long day in the saddle, as opposed to crawling under the canvas.

That means I like my gravel bikes to be stripped down, shorn of excess weight and built for fast fun. Fortunately, that was reflected last year in the launch of fast, lightweight bikes built for fun days out rather than transcontinental endeavours.

The trend started by 3T and Cervélo has gathered pace with the new Specialized Crux, Cannondale SuperSix Evo SE, Wilier Rave and a few more besides joining this emerging and evolving species of drop-bar off-roader. That’s something I want to continue in 2022.

Right now, when it comes to buying a gravel bike, the category is so broad that it’s confusing. It’s like being asked to choose a road bike and being offered everything between a Trek Madone aero bike and a Dawes Galaxy touring bike.

Or, for mountain bikers, being asked your opinion on whether to buy a Trek Supercaliber as ridden by cross-country star Jolanda Neff, or Greg Minnaar’s Santa Cruz V10 downhill sled – they simply aren’t the same thing.

I know sub-genres in bikes can get a little overwhelming but, if one cycling discipline needs it, then it’s gravel.

As a little extra trend, I’m also looking forward to 2022 finally providing all the things we were promised in 2021. Yes, I’m talking about you, 12-speed Ultegra Di2.

Give me the tubeless compatibility I need

All I want for 2022 is to be able to use any tubeless tyre I want on my tubeless wheels.

If you’ve got a relatively new wheelset to take advantage of all the benefits of the best tubeless road tyres, then compatibility isn’t where it needs to be.

In some cases, tyres are simply too tight to fit; in others, there’s a risk of a tyre blowing off.

I used a set of the new, and very nice, ENVE Foundation 45 wheels on my Cannondale Synapse long-term test bike last year and, as the rims are hookless, was limited to those tyres confirmed as compatible by ENVE.

ENVE has tested a pretty wide selection of tyres but I want an international standard.

This is a big topic in itself, and one we’ve covered in detail in our explainer on hookless rims, but it’s something I’d like to see tidied up in 2022.

Hookless rims, such as those on ENVE’s Foundation 45 wheels, aren’t always compatible with every tyre.
Felix Smith / Immediate Media

Not too long ago, road rims used to have an internal width of 13-15mm, and tyres larger than 25mm were treated with suspicion by riders with even modest performance ambitions.

The latest crop of road tubeless wheels have internal widths from 18mm to a whopping 25mm, as seen on Zipp’s new 303 Firecrest. Now, that’s pretty close to what you’d have seen on mountain bike wheels in the not too distant past.

Not only has this been a significant change but it’s also come about at a fierce pace, and I haven’t even touched on hookless rims.

As a result, the current ETRTO (European Tyre and Rim Technical Organisation) is now out of step with some of the latest products on the market; it’s the same for the International Organization for Standardization, which is the global body key to setting these standards into stone.

We need a globally agreed standard covering both rims and tyres and, critically, how they interact.

My overarching point here isn’t necessarily a new trend, but more of a current trend establishing itself as a new standard. I just… 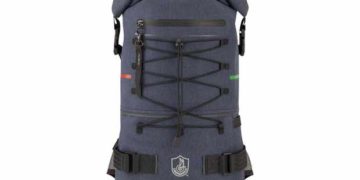 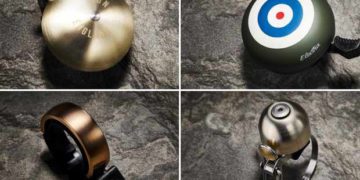 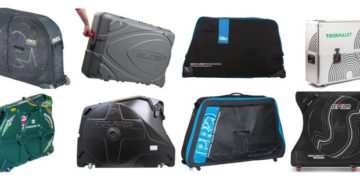 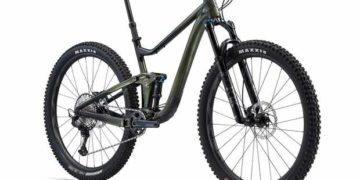 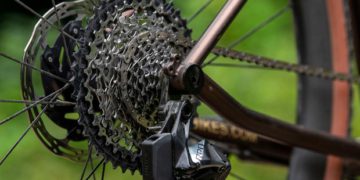